After a knee injury knocked him out of the Giro d’Italia, Tom Dumoulin is expected to return to racing at the Critérium du Dauphiné, Chris Froome will lead Ineos in the French stage race as he looks to round into Tour de France form, the UCI announces that it conducted over a thousand tests for hidden motors at the Giro. Those stories and more in today’s Daily News Digest.

DUMOULIN SET TO RETURN TO RACING AT CRITÉRIUM DU DAUPHINE

After pulling out of the Giro d’Italia due to a knee injury, Tom Dumoulin (Sunweb) is set to return to racing at the upcoming Critérium du Dauphiné as he builds toward a Tour de France start.

As Sunweb sports director Aike Visbeek said in a team press release, “his recovery has been slower than we hoped for,” but Dumoulin is expected to be healthy enough to start the eight-day French stage race pending a final MRI.

The Giro, which Dumoulin won in 2017 and where he finished second overall in 2018, was Dumoulin’s primary objective for the 2019 season, and he came into the race as one of the top pre-race favorites. He was forced to alter his plans, however, after a hard fall in stage 4 left him with an injured knee and a major time loss. The 28-year-old Dutchman started the next stage, but abandoned one kilometer into the race and headed home to recover.

Now, Dumoulin has shifted his focus to the Tour de France, where he finished second overall last year. Although he won’t have had the buildup period he might have hoped for, he also won’t have the mileage in his legs that he would have coming off of a full Giro.

The Dauphiné will be an important stepping stone for Dumoulin’s hopes at contending in July. According to Sunweb, the Dauphiné plan involves “taking no risk and with no focus on the GC” as Dumoulin eyes bigger goals next month.

The Critérium du Dauphiné gets underway in Aurillac on Sunday, June 9.

American cyclist Colin Reuter had a rough day out at the Lime Rock Cycling Grand Prix on Sunday. The afternoon ended with Reuter headed to the hospital, with a thru axle lever stuck in his leg.

Reuter posted photos – and be advised, they are graphic – of the freak incident on Twitter, but appears to have kept his sense of humor about the whole thing, writing: “so i know we were all worried about disc brakes being unsafe, but can we talk about sharp thru axle levers?”

He then posted a video explaining how the crash happened, which makes for an interesting watch (again, graphic images warning).

Over a thousand hidden motor tests conducted at Giro, all negative

The UCI has announced that over a thousand tests for hidden motors were conducted at the Giro d’Italia with all tests coming back negative.

In a statement on Thursday, the UCI detailed its efforts to fight technological fraud at the Italian Grand Tour, noting that “1,312 tests were conducted using magnetic scanning technology” at stage starts. A further 113 tests were conducted using X-ray technology at stage finishes; “between four and twelve bikes were tested on each stage [using the x-ray method], including those of the stage winner and the pink jersey holder.”

The statement also detailed plans to develop increasingly robust methods of combatting “motor doping.” The UCI is developing a tracker to be fitted on every bike in the peloton that can detect motors during a race, and already tested the method in collaboration with multiple teams at the 2018 Tour de France. Additionally, improvements are continuing to be made to the tablet-based magnetic scanning technology, with a new version of the tablet testing system expected for 2020.

Froome to lead Ineos at Dauphiné

Ineos has confirmed its lineup for the Critérium du Dauphine, with Chris Froome set to lead the team in France.

With Geraint Thomas heading to the Tour de Suisse, Froome will have a chance to test his Tour de France form at the Dauphiné. He has won the overall title there three times over the course of his career.

In a team press release, Froome said that he was content with his current form following a Tenerife training camp.

“I’m really happy with where I’m at currently,” he said. “I was probably a bit eager earlier this season in Colombia and probably did a little bit too much. I feel like this camp has been very different to that and I’ve been able to do exactly what I need to do. The feelings are quite different now having come back from Tenerife, if I compare them to how I felt when I got back from Colombia.”

Cyclingnews reports that American racer Cory Lockwood, recent winner of the Redlands Classic, could be facing a suspension after apparently intentionally crashing other riders at the Cascade Classic.

Aevolo Cycling director Mike Creed told Cyclingnews that Lockwood locked up his brakes while in front of other riders on the third stage of the race, in frustration that no one in the peloton would help chase down the day’s breakaway. That caused a crash, bringing down Serghei Tvetcov (Floyd’s Pro Cycling) and Luis Villalobos (Aevolo). Lockwood was subsequently kicked out of the race.

Movistar transfer rumors: Carapaz could stay after all, Fuglsang in talks with team, Quintana and Landa likely leaving

The transfer rumor mill has been busy these past few days, and it shows no signs of slowing down. Spanish newspaper Marca has published a story detailing the various rumors surrounding potential comings and goings at Movistar, reporting that Giro d’Italia winner Richard Carapaz could stay after all following talk that he would be heading to Ineos next year.

What’s more, Enric Mas is apparently set to leave Deceuninck-Quick-Step to join a growing youth movement at Movistar, while the team is also reportedly in talks with veteran Jakob Fuglsang. The reigning Liège-Bastogne-Liège champ is currently in his seventh season with Astana.

There could be room in the budget for those newcomers if other rumors prove true: According to Marca, Mikel Landa could move to Bahrain-Merida, while Nairo Quintana is likely headed to Arkéa-Samsic.

Laporte doubles up in Luxembourg 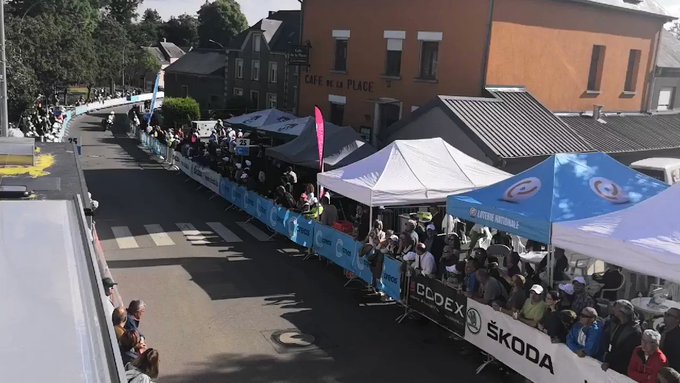 Big crash on the finish line for Justin Jules. @CyclingTeamWB@LAPORTEChristop seems to cross the line in first position#skodatour19@TeamCOFIDIS

THIS RIDER WILL TAKE THIS YEAR FRENCH RACE SERIOUSLY

Check out this amazing bike lights for amazing Prizes

SEE WHO STARTS IN UAE TOUR THIS YEAR