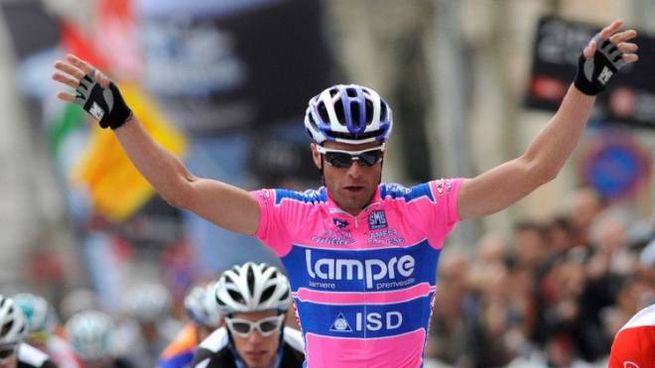 On Sunday, Petacchi’s former teammate Danilo Hondo confessed to blood doping, saying he paid Dr. Schimdt €30,000 for his blood doping services in 2012 and 2013. He said he contacted Dr. Schmidt via a Slovenian or Croatian phone number to arrange for the blood transfusions. Hondo, who has lived in Switzerland for a number of years, was immediately sacked from his coaching role by the Swiss cycling Federation.

Petacchi and Hondo rode together at Lampre-ISD from 2011-2012, with the German often acting as Petacchi’s leadout man in the sprints. Hondo retired in 2014, while Petacchi retired mid-way through 2015. During his long career, which began in 1996, Petacchi won 152 races, including the 2005 Milan-San Remo and 22 stages at the Giro d’Italia.

“I’ve never had a blood transfusion. I’ve no idea why my name appears in this dossier,” Petacchi told Corriere della Sera after commentating on stage 4 of the Giro d’Italia for Italian television.

“I found out from you that this Mark Schmidt guy was a team doctor at Team Milram when I raced for them. Perhaps he followed the German riders: I never saw him or met him. I never went to his surgery, in Germany or anywhere else.”

Petacchi’s mobile phone was switched off or unavailable when called by Cyclingnews for further reaction.

Hondo confessed to blood doping in an interview with German ARD television. Hondo said small doses of blood were extracted in a secret location in Frankfurt, Germany and then re-injected before major races such as Milan-San Remo, the Belgian Classics and the Tour de France.

Petacchi excluded the idea that Hondo could be trying to blackmail him.

“I’ve always considered Hondo a friend,” he said. “We even swapped best wishes a few months ago and there’s no reason for a vendetta. I can’t at all understand such a falsehood.”

The Operation Aderlass investigation is centred around the activities of Dr. Schmidt and several family members and helpers in Erfurt, southern Germany. Schmidt was previously a doctor at the Gerolsteiner and Milram teams and was accused of facilitating doping by Bernard Kohl when the Austrian rider tested positive for EPO in 2008 but was cleared after a trial.

Numerous cross country skiers have been caught up in the police investigation and it has been reported that between 40 and 70 blood bags were discovered in a garage in Erfurt, with German authorities suggesting that 21 athletes from five different sports and eight different countries are under investigation.

Austrian cyclists Georg Preidler and Stefan Denifl have already confessed to blood doping. They have been suspended by the UCI and face suspensions if found guilty of blood doping.

There is suspicion that athletes use micro-blood doping techniques to stay within their Biological Passport parameters, taking out as little as 135 millilitres of packed red blood cells away from competition and then infusing it before or during major races.

Needles are banned in cycling, but the rule is difficult to enforce. Athletes are suspected of using altitude training, long-distance travel and illness as a way of justifying any variations in their Biological Passport, while cases are sometimes dropped because they require a unanimous judgment by three experts to move to the disciplinary phase.