Elia Viviani wins stage 4 of the Tour de Suisse, Geraint Thomas crashes out of the race, Tom Dumoulin not quite ready to resume training. Those stories and more in today’s Daily News Digest.

Geraint Thomas (Ineos) abandoned the Tour de Suisse after crashing with around 30 kilometers left to race in Tuesday’s stage 4.

The defending Tour de France champ went down in an incident that also saw Astana’s Andrey Zeits hit the deck. Thomas received medical attention while sitting in the road, appearing to be in some pain, although he appeared to be able to move both arms. He ultimately abandoned the race, as did Zeits, who was loaded into an ambulance on a stretcher. 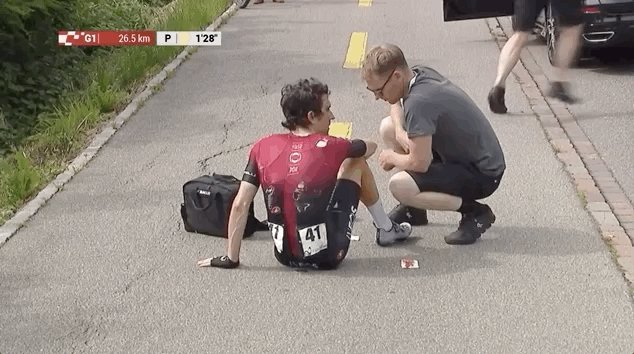 Tough to see the champ on the deck. @GeraintThomas86 appears to be indicating how he crashed.

Thomas started the 2019 season expecting to be one of two top options for Ineos at the Tour de France alongside four-time Tour champ Chris Froome. Froome’s Tour preparation plan took him to the Critérium du Dauphiné, while Thomas’s ran through the Tour de Suisse.

Froome crashed during a recon of the Dauphiné time trial, however, sustaining multiple serious injuries that will keep him out of the Tour. That left Thomas as Ineos’s top option for the July Grand Tour.

Whether Thomas sustained any injuries in his Tour de Suisse fall is not yet clear, with Ineos saying via Twitter that updates will be forthcoming.

UPDATE: Ineos has since provided an update, saying Thomas “escaped relatively unscathed” from his crash. The Welshman “suffered abrasions on his shoulder and a cut above his right eye” but, crucially, “Thomas’ involvement in the Tour de France isn’t likely to be affected”.

As we head into the final 30km of stage four at #TourDeSuisse @GeraintThomas86 has gone down in a crash. Team and race medical personnel are with him now. The Welshman is sat up talking to the team. Further updates to follow 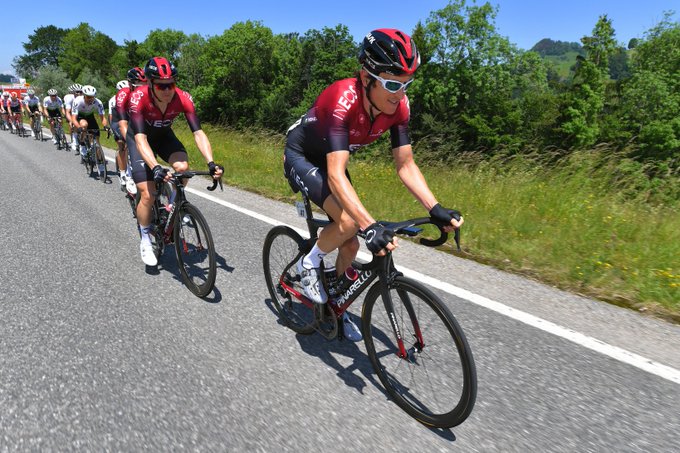 Sadly @GeraintThomas86 has been forced to abandon the #TourDeSuisse. He was alert and speaking to the team after the crash and will be taken to hospital for checks. Further updates to follow

It’s been a tough season for Ineos in the crashing department, with this past week being especially challenging, but Chris Froome at least seems optimistic about his recovery. 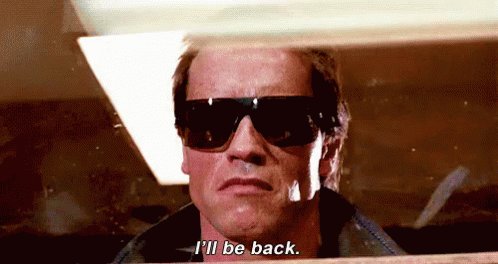 Elia Viviani sprinted to victory in stage 4 of the Tour de Suisse, taking advantage of a strong Deceuninck-Quick-Step lead out and topping Michael Matthews (Sunweb) and Peter Sagan (Bora-Hansgrohe) at the line.

“I’m pretty proud of the team, and happy with the win, because it was a long time since I won,” Viviani said. “It means a lot, because we have a few weeks until the Tour de France.” 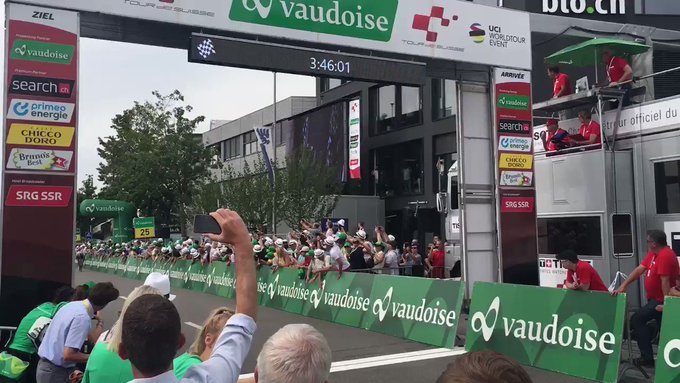 Sagan continues to lead the race with the Tour de Suisse yet to visit the high mountains, although the GC battle has been shaken up by Thomas’s departure, with Bernal likely to take over for Ineos as the featured rider in Switzerland.

The 163.9-kilometer stage from Murten to Arlesheim featured a few short climbs in the second half of the day, but a flat run-in to the finish had the sprinters and their teams motivated to keep the race together for a bunch kick. The day’s main breakaway was kept on a relatively short leash, and ultimately swept up with just over 10 kilometers to race.

A handful of riders fired short-lived attacks off the front in the closing kilometers, but the fast finishers would not be denied their battle for the stage.

Deceuninck-Quick-Step led the way for Viviani into the final few hundred meters, with Michael Morkov serving as the final lead out man, while Sagan was tucked in just behind Viviani. With around 200 meters to go, Viviani launched and Sagan followed suit. Sagan kept it close for the first few moments before fading in the closing meters, with Viviani taking the clear win and Matthews surging past Sagan to nab second.

The victory is Viviani’s first since the third stage of Tirreno-Adriatico in March.

The Tour de Suisse rolls on with Wednesday’s stage 5, 177 kilometers from Münchenstein to Einsiedeln.

Dumoulin not quite ready to resume training after all

Tom Dumoulin may not be quite ready for training after all. A day after his Sunweb team announced that Tom Dumoulin was headed to an altitude camp following a successful minor surgery, NOS reports that the Dutchman turned his car around instead of completing the trip into the mountains.

“He called me twice on the way yesterday”, trainer Hendrik Werner told NOS. “He asked himself the question, “Am I ready? … And he turned the car around.”

After pulling out of the Critérium du Dauphiné with lingering knee pain following his Giro d’Italia crash, Dumoulin underwent an operation to remove a small piece of gravel in his knee. Although the surgery was apparently a success, Dumoulin does not yet feel fully ready to resume his pre-Tour de France prep.

Peter Sagan’s Tour de Suisse stage 3 win came in no small part thanks to his successful maneuvering onto the wheel of Trek-Segafredo lead out man Jasper Stuyven in the final few hundred meters. The three-time world champion muscled Trek’s John Degenkolb off of Stuyven’s wheel with a bit of shoulder rubbing, hung in the Belgian’s slipstream for a few moments, and then launched a winning sprint to the line.

Degenkolb, who ultimately finished third, was unhappy with the way things played out,

“I had to fight with Sagan for my own teammate’s wheel and it was super crazy against him. I think it was a little bit over the limit,” Degenkolb said, according to Cyclingnews.

“We had the team to make a better finish than this. Yes, it’s not finished, but it was a big chance today, and it probably could have ended a little bit better, so it’s a little disappointing.”

Colombian sprinter Fernando Gaviria (UAE-Team Emirates) is still dealing with pain in his left knee, over a month after he pulled out of the Giro d’Italia with the same issue.

Giuseppe Saronni, two-time Giro winner and now a member of the UAE-Team Emirates brass, told TuttoBiciWeb that Gaviria’s status for the Tour de France was unclear due to the lingering knee discomfort.

“Even now he is struggling with this irritation, which our orthopedic surgeon – Dr. Dirk Tenner – is trying in every way to solve,” Saronni said, according to TuttoBiciWeb.

“It is clear that in these conditions he cannot take part in such a hard and selective competition. It is a big question mark.”

I will be ready for the next tour says Thomas Geraint

See what riders did on today’s stage race